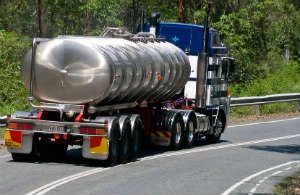 Well… the news is out. A large trucking company from California just pleaded guilty to transporting a huge amount of hazardous materials. Apparently, the company transported more than 128,000 pounds of lead-contaminated battery chips.

And, these products are known to be dangerous. In fact, they can cause permanent damage to young children’s health if they somehow ingest or inhale the substance (like in contaminated dust or soil, etc.)

The company, Wiley Sanders Truck Lines, which operates within California, as long as many other states, is based out of Troy, Alabama. They made a plea agreement at the end of February, in which they admitted to three felony counts. These included them irresponsibly, and knowingly, transporting the product from a battery recycling facility in Vernon, California, to a different facility in Bakersfield, California.

So, what happens now? Basically, a hefty fine. Wily Sanders now must pay the federal government a whopping $1.5 million penalty for the crime. And, that’s just the half of it. The company has to pay an additional $1.5 million to an environmental fund. This fund, established by the Los Angeles County Department of Public Health, supports residents in the areas impacted by the shipments.

Essentially, through the recycling process, the facility ended up creating a lot of hazardous waste. In the end, the product was extremely toxic. And, therefore, it posed as a threat to public health in the nearby communities. In fact, according to the prosecutors on the case, Wily Sanders knew that their trucks didn’t have enough protection to prevent the hazardous materials from leaking out of the truck.

The behavior of the company threatens the health and safety of everyone in the area – but mostly children, who are more likely to ingest lead-invested materials. While they are paying the price and hopefully the toxic materials are cleaned up… what about the traces left behind? What do you think about this hazardous materials case?

AI Trucking: Not Any Time Soon

AI trucking has been on the minds of countless businesses and commercial trucking companies. Unfortunately, it doesn’t look like it will be here anytime soon. With the rise of self-driving vehicles, from Taxi services to actual robots, the thought comes