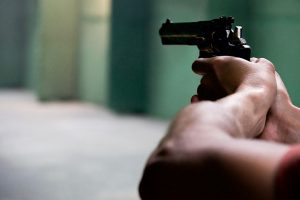 Among other popular quarantine items like toilet paper and hand sanitizer, gun sales increased this week during the COVID-19 outbreak.

NBC 7 reported on the dramatic increase in gun sales at San Diego’s Poway Weapons & Gear Range. The store’s Director of Sales Operations, Danielle Jaymes, spoke with reporters. “What you see on my shelves and my walls, that is all I have in stock,” she said.

She said their sales doubled this weekend over the previous. She compared the spike in gun sales to big shopping dates like Black Friday. The run on guns cleared out her inventory. “All my backstock of everything is gone,” she told NBC 7.

Jaymes’s experience mirrors other gun stores around the country. Lines reportedly stretched blocks from the front door of other locations. The epidemic seems to have fanned fears leading many to bolster self-defense.

Gun Sales Rise Across US

To put numbers to anecdotal evidence, Ammo.com reported 68 percent increase in sales for the period between February 24 and March 4 compared to the previous 11 days. Some states drastically outpaced that. Specifically, North Carolina saw a 179 percent jump in gun sales. Georgia followed closely with a 169 percent increase.

While general fears surrounding the outbreak seem to compel many to purchase weapons, so too do its cultural symptoms. A report from The Trace covered the increase in gun sales among Asian Americans fearful of xenophobic backlash.

One American of Chinese descent that operates a gun store east of Los Angeles saw gun sales increase 500 percent. David Liu, owner of Arcadia Firearm and Safety, said of his customers, “They worry about a riot or maybe that people will start to target the Chinese.”

Meanwhile, China shows signs of finally stemming their outbreak. Likewise, South Korea, which discovered its first case around the same time as the US, exhibits declining numbers of new cases. Experts attribute South Korea’s success to its quick response and proliferation of testing. The United States struggles to match other nation’s testing numbers, though testing here is ramping up.

COVID-19 has changed the way we work and operate. While many are being laid-off and many stores are closing, this has not been the case for everyone. While many folks are at home and on lockdown, truckers are still moving

Among other popular quarantine items like toilet paper and hand sanitizer, gun sales increased this week during the COVID-19 outbreak. NBC 7 reported on the dramatic increase in gun sales at San Diego’s Poway Weapons & Gear Range. The store’s