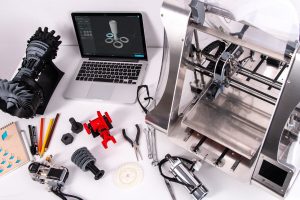 General Motors did the impossible! The unthinkable! The inconceivable! The absolutely best thing you can do as an automaker! Generate parts ahead of time with 3D Print software! By artificially recreating the parts necessary to showoff a prototype, GM essentially has come up with a genius replica of their Corvette C8!

3D Print technology is nothing new. Every day, it’s becoming more and more popular, with it’s relevance becoming more and more common. With that said, it’s a high likelihood that they’ll be the norm before long. The parts for the car in question have undergone a 3D Print process that in turn is also training robots ahead of time while working the assembly line. It’s quite genius actually!

But what’s the 3D Print story here with GM?

Beforehand, GM had been using 3D Print technology to develop new vehicles like the Corvette. But when the pandemic started getting bad, face shields were the only things in the way of a staff destined to get it done. That’s the spirit! Kevin Quinn, the Director of Additive Design and Manufacturing, believes that the only way people at work will work is if they’re comfortably safe enough to work with face shields. 3D Print technology is really the forefront of the future.

With that said, the mid-engine Corvette C8 had been built to be seen. It was nonoperational but still pretty cool considering that 75% of the parts have been made with this tech.

Sensors for these vehicles with driver assistance features are aiming towards the right mindset.

The team at work not only uses the parts to fit them in a road-ready vehicle, but they also do all they can to make the production line ready to build that vehicle.

GM has two facilities that they continue developing this technology at.

CB Radio Is A Necessary Tool For Truckers. Here’s Why:

This time of year, it’s long been something of a clarion call among truckers to their fellow drivers to work together to help prevent the kinds of pileups. While truckers can’t control the behavior of the four-wheelers around them, plenty

America’s Finest City gas prices are reported across the county are on the rise. They are currently at $3.49 a gallon here. Also at $3.69 there. In fact, they have been spotted even higher at other gas stations around the