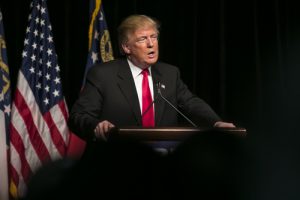 President Donald Trump will visit San Diego today — his first visit to California as the nation’s leader — with plans to survey the border wall prototypes he commissioned before he meets with military personnel.

His whirlwind tour is expected to only last a few hours, beginning with his arrival aboard Air Force One at Marine Corps Air Station Miramar at 11:30 a.m.

Customs and Border Protection picked eight proposals for construction along the San Diego border, which were finished in October and have been tested in a real-world border environment for evaluation since.

The eight prototypes fall into two categories — four are designed to be 30-foot concrete walls, and four are made of other materials.

Friends and foes of Trump plan to rally Tuesday ahead and after his California visit.

The visit is mobilizing both supporters and critics. A pro-wall rally has been planned to greet Trump at the prototypes. And while some critics have organized rallies elsewhere to avoid a clash, counter-protesters are anticipated to make an appearance as well.

The crowd will be confined to a dirt lot that the Sheriff’s Department has designated a temporary “free speech zone” off Enrico Fermi Drive. People are prohibited from carrying anything that could be used as a weapon, from slingshots and rocks to guns and knives.

Meanwhile, San Diegans for Secure Borders is planning to show their support for Trump and the wall with conservative groups and speakers at Bristow Court in Otay Mesa.

Security is sure to be tight, although it is unknown to what amount Trump might expose himself in examining the prototypes.

Trump’s statements about building the wall — and making Mexico pay for it — has stirred anger in Mexico. But U.S. and Mexican authorities appeared to be collaborating closely on security measures for the president’s visit.

In Tijuana on Monday afternoon, the U.S. president’s impending visit brought much activity to the southern side of the corrugated border fence, lined with a dirt road that is littered with trash and the rusting bodies of abandoned cars.

Authorities in Tijuana said they were preparing to block off all access to two kilometers of the existing fence and would close the dirt road that runs along the fence.