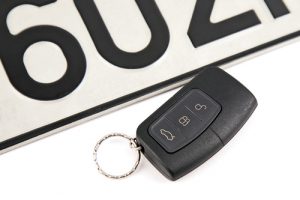 SAN DIEGO, California — The world has seen a lot of technological advances in cars over the last several years, but not much with license plates. Those days now appear to be over because license plates just got a whole lot smarter. In San Diego, you’ll start to see some new license plate technology very soon.

“This is not clunky and chunky like a big piece of metal,” said Allan Cooper, of Reviver Auto, which designed the smart, e-ink digital plate. “Your registration becomes renewable. You pay online and these just click over to the next year.”

It’s called the Reviver Plate, and it can do a lot.

The state legislature approved the technology testing in 2013. A DMV spokesman said the pilot program allows the agency to “evaluate the use of alternatives to stickers, license plates, tabs, and registration cards, subject to certain requirements.”

Cooper said the plates are on thousands of cars across the state.

“Testing for just the viability and functionality of the plate,” Cooper said. “This is just the next big advancement.”

If your car is stolen, it will actually say stolen on the plate. Additionally, if there’s an Amber Alert, it can relay the message right on it.

Cooper said consumers have control over their privacy. You can’t change the numbers and it’s on the car tightly.

The license plate costs $699. There’s also a $7 monthly fee for the service.

Cooper said the company is actively seeking San Diego car dealerships to sell them on their lots.

The state says its pilot program for the license plates should end by New Year’s Day.