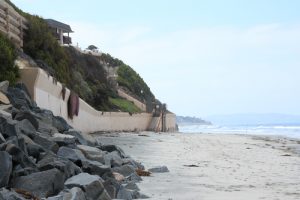 A leading environmental group is set to release a new report Thursday on whether San Diego beaches make the grade when it comes to harmful bacteria.

Last year, La Jolla Cove was given a “D” grade from Heal the Bay which released “Beach Bummer List”. It was the 5th-most polluted beach in California. The beaches are being rates based on water’s quality.

Environmental experts say wildlife, rain, and humans all bring pollution to the ocean and result in high bacteria levels. Two years ago, in La Jolla Cove, lifeguards suffered several infections, and many blamed the bacteria levels in the water. Another San Diego Beach that sometimes makes that list is Imperial Beach.

Last year, San Diego County, with 97% of 75 beaches that were monitored, received an “A” or “B” grade. The county typically tests the water and posts signs when the water is not safe for swimming.

The citizens’ forum will be held by the International Boundary and Water Commission, a bi-national agency charged with overseeing efforts to stem ongoing pollution.

Keith Kezer and Dominique Edwards of San Diego County’s Department of Environmental Health will provide an update on year-round water quality monitoring at South Bay beaches. Their presentation will also include analysis of interactions between the Tijuana River, Tijuana Slough National Wildlife Refuge, and the Pacific Ocean.

City Planner, Jim Nakagawa, will address the city of Imperial Beach’s general plan and Local Coastal Program, during another discussion, which was adopted in 1994 in response to states laws that require local authorities address climate change impacts.