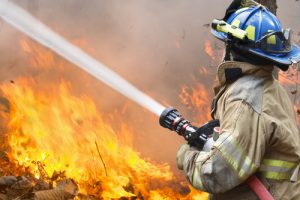 Early this morning, a fire broke out by the Interstate 5 freeway.

It happened it San Ysidro in the city of San Diego by the Dairy Mart Road exit.

Firefighters arrived at the scene around 5 A.M.

No residential homes were under threat of catching on fire. However, the I-5 was shut down.

The fire started by the northbound lanes and carried on to the southbound area of the I-5.

Firefighters reported that the flames were “pretty high” in length.

The fire spread very quickly to almost half an acre.

The water hydrant nearest to the fire was at a self-storage facility. However since it has been shut down, firefighters had to arrive at the location of the fire with water trucks.

There were 35 firefighters on the scene.

Some of the challenges that the firefighters had to face was caused by the river and the thick brush by the freeway.

At 8 A.M. the lanes on the I-5 were open and allowed people to drive.

The weather conditions were good, which is what helped the firefighters put out the fire easily.

It was humid and not windy.

There were no home or car damages. The freeway is open and traffic is flowing.