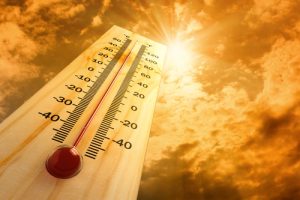 On Tuesday, in some parts of San Diego County, there will be triple-digit temperatures — one day after heat records were broken in several communities.

Tuesday’s forecast calls for temperatures in the mid- to high-90s and into 100 degrees in some areas. The Excessive Heat Warning remains in effect for most of the county for today.

It is predicted to be effective till Thursday at 8 p.m. The coastal areas of San Diego are not included in the warning.

On Monday afternoon, the mercury topped out at 102 degrees in Ramona, tying the East County community’s prior record for the date, set in 2006.

Temperatures near the immediate coast are expected to reach the high 80s, higher temperatures are not expected.

The NWS issued a High Surf Advisory that began Monday at 8 a.m. and lasts through 9 p.m. Wednesday.

Forecasters say surf levels of 5-9 feet will be possible.

The desert northeastern corner of San Diego County will continue to see high temperatures, with the mercury forecast to rise as high as 121 degrees today and 123 degrees Wednesday.

Authorities urge the public to avoid potential health hazards resulting from the extreme heat by drinking plenty of non-alcoholic fluids, seeking out shady and/or air-conditioned environments and checking up on relatives and neighbors to make sure they are handling the heat all right.

Additionally, children and pets should never be left unattended in vehicles during hot weather, when car interiors can reach lethal temperatures in a matter of minutes, officials warn.