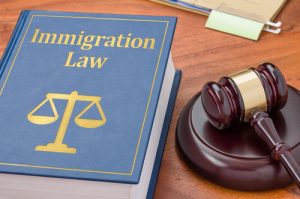 The volunteers rushed to the Greyhound bus station in San Ysidro. Families seeking asylum from Central America were scheduled to arrive at around 6 p.m. Two buses brought about 63 people before 8 p.m. The volunteers brought blankets, in case these new families needed to spend the night.

Among those facing a night outdoors at the bus station were parents with young children. Marco, a 40-year-old Guatemalan man, comforted his 6-year-old son with a cookie given to him by volunteers. A volunteer attempted to explain to Marco’s nephew in Iowa that he would need to purchase bus tickets for his uncle. The nephew requested Marco to call back the next day.

Other immigrants were luckier. 29-year-old Kateri, traveling with three young children, reached family in Los Angeles who agreed to pick her up from San Diego. Kateri had injured her hand crossing the border near Tecate when she decided to go over a fence with her children. She had been worried that the kids would be hurt, but, “Thank God it was me and not them,” she said.

Immigrants Find Shelter for One Night

Volunteers worked to organize the families. However, the workers had no idea where they would put all these people for the night. Then, a call came in that changed everything. A church offered to take all the new immigrants until more space opened up in the shelter.

Kevin Malone, executive director of the San Diego Organizing Project, said that every day, it looks like volunteers may have to leave people on the street. He stated that he and his fellow workers have been “patching this thing together minute by minute.”