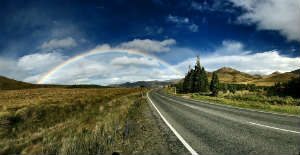 SAN DIEGO, CA – Although the San Diego rain may seem like it’s coming to an end, this Friday is only a break from the harsh weather. This weekend, experts predict a second more ravenous storm, to hit the region this weekend.

Meteorologist Megan Parry has made her prediction about this weekend’s storm. She expects Friday to be an overall nice day. While some parts of the county may be hit with light rain, others should report mostly dry weather and even some sunshine.

In lighter news, the rain has created an opportunity for some beautiful rainbows.

Parry states that the sporadic showers will continue through Saturday morning. After the morning, the second storm of the week will move in from the north and bring a heavier rainfall.

This Saturday storm will peak in the afternoon and evening hours, but will continue throughout the day.

The county warns of flash floods and flooding in parts of the county.  In particular, the mountain and valley areas are prone to flooding. There are two mountains within the region that the storm will reach. These mountains are Mount Laguna and Palomar Mountain. The snow levels of these mountains are supposed to increase from the regular one inch to 3 inches.

There is also a possibility of a third storm. It may occur on Sunday afternoon. Although it isn’t expected to be as intense as Thursday and Saturday’s storm, it could linger until Tuesday. Only time will tell whether or not the third storm will occur.