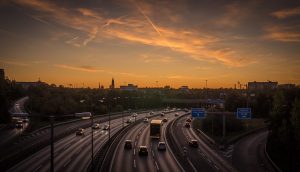 SAN DIEGO, CA — A SigAlert was issued on I-15 Wednesday night after a UPS big rig collided into a guard rail. Consequently, the truck jackknifed while on the I-15. Then, the semitrailer skidded up the Interstate while traveling northbound. Importantly, it should be noted that the alert was issued for three lanes of the freeway until midnight.

Moreover, the crash occurred around 9:40 p.m. According to the California Highway Patrol, the big rig began to veer out of control between Interstate 8 and Adams Avenue.

As a result of the accident, at least 35 gallons of diesel fuel spilled into the freeway, as reported by the San Diego Fire-Rescue Department.

While traffic continued to move steadily in the carpool and first lanes, the same cannot be said for the others. In fact, the Number 2, 3, and 4 lanes were blocked until around midnight, according to the CHP.

At this time there have been no injuries reported.