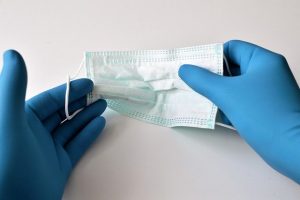 During the pandemic, many express concern for those detained in close quarters after capture by ICE, DHS, or border patrols. Even before the health crisis, advocates drew attention to facilities used to house migrants and asylum seekers for inadequate living conditions. Now, those concerns couple with fears over transmission of covid-19 in cramped detention centers.

As a way of trying to help improve safety at one detention center, one assemblyperson from San Diego, Lorena Gonzalez, drove up with a shipment of face masks. She intended to make a donation to the Otay Mesa Detention Center.

After complaints over a lack of protective gear arose from detainees, Gonzalez partnered with immigrant advocacy organizations to make the donation. The shipment included 1,000 masks in total.

In response, both ICE and the private company assisting them, CoreCivic, stated they provide the proper care and treatment mandated by federal authorities.

“All detainees at OMDC have the appropriate personal protective equipment for maintaining their safety while detained in ICE custody,” said ICE spokesperson Lauren Mack.

However, the facility includes 111 confirmed covid-19 cases among its detained population. Of those, 67 are held by ICE. the remaining 44 are criminal inmates under US Marshal custody. Additionally, at least 25 members of staff tested positive.

Amidst the health crisis, detained migrants and asylum seekers voiced concerns over the lack of protective measures. Several stated they’ve worn the same mask for weeks. Furthermore, detainees say the facility lacks enough soap. It also lacks space, prohibiting them from practicing social distancing with at least 6 feet of space.

Officials state they’re reviewing whether they can accept the donation made by an assemblyperson.