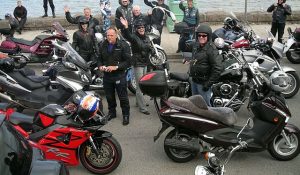 La Mesa Motorcyclists united a week ago to ride against police brutality. They began at Oak Park and finished outside police headquarters. The ride began around 1 PM. It comes on the heels of recently condemned police behavior in eastern San Diego county. These events are part of a larger scope of protests. And San Diego citizens are getting creative.

Demonstrations have been underway since late May to protest the murder of George Floyd. But with Covid-19 still an unsolved issue, large crowds can feel threatening. San Diego residents are finding ways around this, however. Car caravans are a safe option. Skateboarders and rollerbladers are starting to mobilize. The motorcycle parade is just one instance of citizens practicing social distancing while making their voices heard this month.

The leader of the biker faction, “Caveman”, says they are riding to encourage the police to reflect. “I’m not a big fan of police brutality,” he said. “And it’s unfortunate that it has come to our community. They need to stand back and maybe look at themselves.”

The June 14th protest was billed as peaceful. Bikers and organizers are asking for San Diego police to examine the frequency with which they utilize force against civilians.

Riding for Reform: What’s the Message?

Activists are discussing many different solutions. One suggestion involves decreasing police budgets. Officers have noted that they have their hands full. They are a one-stop-shop for disputes of all levels. Moving money over to social programs could make their lives easier.

Consider this: a neighbor is having a party. The music is too loud. The family living next to them calls the police. Across town, an armed burglary is in process. The same department is having to handle both situations. One of those events is much less likely to required armed officers. Creating peaceful divisions of non-police can, in fact, empower the police to better do their jobs.

The ultimate goal is peace. How we get to that is a tricky road. But citizens are opening the door to dialogue. And some people on the other side are listening.

La Mesa Police Chief Walter Vasquez responded to the motorcyclists. “Thank you. But we need their input,” Vasquez said. “And then change needs to occur, especially from the police department. We all need to get better.”