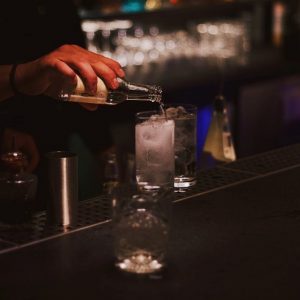 SAN DIEGO, CA – Tony Aversa, the barkeep at 710 Beach Club in Pacific Beach, was attacked over the holiday weekend. Patrons were filmed attacking Aversa after he inquired about their facemasks.

Lately, being a bartender during this pandemic has felt more like being an enforcer of sorts. You’re eating. You’re drinking. But if you’re not even trying to wear your mask during other parts of the day, what are you actually doing?

Your inaction to keep people around you safe, while not wearing a mask, is deadly. That’s the mentality this barkeep upholds, in any hairy situation.

On Labor Day weekend, a group asked for service, while denying any commands to wear masks. When one of the men asked to speak with a manager, Aversa welcomed them, if only they could wear masks.

What occurred next was an altercation as the man pushed a female barkeep in response. The security guard and Aversa tried to divide the fight but another man sucker-punched Aversa. The hit broke his nose and sinus cavity.

Which isn’t great when you return to work after months of avoiding the virus. He’ll be out of work until the surgery he’s due for is a thing of the past.

Video footage shown from surveillance was present in at least two different vantage points. One from a security camera, another from a cell phone’s camera. It was quite violent.

Luckily, for the barkeep, Aversa’s mother is raising money through GoFundMe to raise funds to help her son with expenses. She’s also rallying the community together to find and apprehend the man who led the damning blow.

All I can say about this, after having read all that, is how glad I am my brother isn’t a barkeep during these times. He used to work for a bar during college, but has since gone on to enjoy a booming career at Pepsi. Humble beginnings with rougher chapters make for a better person.