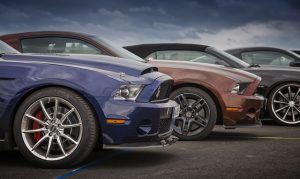 The leaked product information says, the Ford Mustang Shelby GT350 and GT350R will go away in 2021, according to autoblog.com. With those two vehicles on their way out, there goes the 5.2 liters flat-plane-crank V8 and its exotic soundtrack. Yet, there is “no future product talk” when Ford when contacting the company about the engine’s future. Moreover, it seems the 8,250-rpm “masterpiece” has no home.

“With the 760 horsepower Shelby GT500 now in full stride, we will finish production of  Shelby GT350 Mustang and GT350R this fall as planned. This makes the way for new additions to excite our passionate Mustang fans for 2021 model year – including the limited-edition Mach 1.”

The 2021 replacement is Mach 1 says autoblog.com and has high hopes for it. They think it steals a number of parts from the GT350. But says the engine isn’t one of them. In addition, they feel this generation of Ford isn’t long for the world at this point. According to Automotive News reveals the next-gen Mustang tags it as a 2022 reveal. With 2023, being the first model year it is available. Still, they lament they will miss the GT350 in the 2021 and 2022 Mustang lineup.

Over the years, Ford has updated the GT350 and GT350R. autoblog.com‘s most recent drive in the car was in the GT350R on track. They said that it was updated (for 2020). But, the Ford GT350R only has one year of life left in it. It would make a fantastic catch if you can get your hands on one to own.

Also according autoblog.com, with the GT350 and GT350R no longer in the picture, they are calling the super-expensive, speedy, rugged and sporty GT500 the only Shelby-branded Mustang left in the lineup. autoblog.com says goodbye to the GT350 and is thankful for the wonderful service.