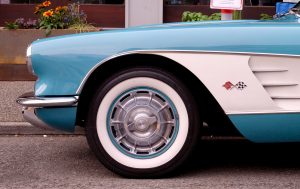 China is expanding its manufacturing and copycat skills by replacing its entire domestic fleet with locally built electrical alternatives. This was evident in the 2020 Beijing Motor Show, demonstrating what the future has in store for Chinese motorists as a result of flattery tactics. Songsan motors has said for a US Dollar amount of $86,000 in Chinese currency, they offer the SS Dolphin. Which wouldn’t be a problem at all if the plug-in hybrid wasn’t the spitting image of the four-headlamp 1958 Chevrolet Corvette C1. It comes heavyset with a 1.5-liter turbo engine and electric motor fed by a 16 kilowatt hour battery pack. It’s also full of LED lights and a removable hardtop on a longer body than Chevy’s.

Background of The Songsan Inspiration

Late 1950’s and the industry had been undergoing a transformation from corporate big wigs to smaller and more intense companies pitting against each other.

Some few unknowns from Europe were trying to compete with the all-American Ford and General Motors.

In came the 1958 C1 to rattle the competition. Corvettes were already the bee’s knees. But here, you had a 230 horsepower V-8 engine that was a real hit with any of the major buyers. And this was just the cruising version. A race-ready version was made ready for local dealerships around the country.

It was a sweet two-seater. To compete with Ferrari, Jaguar and Porsche.

You would think a company as big as their’s would hound after Songsan for making an imitation Corvette. But they haven’t.

Kevin Kelly, the senior manager of car and crossover communications at Chevy didn’t mind either.  “They are not using any of our trademarked names or logos, and the design is not identical to the C1.”

Rip-off or not, if you have a similarly beautiful car in need of shipping, look no further than San Diego Auto Shipping. We can take care of your classic roadster and keep it preserved in enclosed car transportation. Visit us for a free quote on your vehicle today!