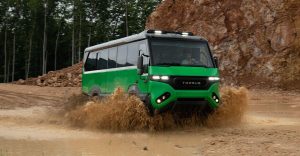 The Torsus Praetorian happens to be the latest creation of the heavy duty utility automaker. It’s an off-road bus capable of holding 35 people. Additionally, it can also handle a 33 degree incline and sift through seas of three feet in depth. This bus really is an impressive entry from Torsus. Being that the vehicle is most suitable for the end times. Answers are likely to lead to rugged trucks or surly SUVs. But in this case, the Torsus can handle a lot. This, for instance, is thanks to the heavy-duty MAN chassis. As well as the four-wheel drive. And who could forget about the six-cylinder engine? It’s engine-ous!

This Torsus vehicle is strong enough to haul folks through rough and tough environments. The Praetorian utilizes a 6.9 liter MAN D08 turbodiesel engine. With that type of strength in haul, there’s an ability to operate off of 286 horsepower and 849 pound-feet of torque. Combo that with a nine-speed ZF automatic transmission. Additionally, it’ll operate in rear-drive mode. Where the front-axle is capable enough to be engaged. Not to mention there are front differential locks. In which it restricts the front wheels’ steering angle. Torsus is claiming a 32 degree approach angle will work pretty well. With only 13.4 inches to be the minimum in ground clearance. Therefore, the maximum possible weight.

Torsus happens to be very happy with the Praetorian’s own A/C unit. It has even been testing well in environments such as the desert and the forest. It’s been on sale since 2018, and yet newer innovations in 2021 show off LED lighting. While also showing a power-operated door that incorporates pneumatic footsteps. The design of the Praetorian is seen as a vehicle destined for industrial and military usage. However you may feel about that, it’s looking like a pretty solid vehicle for the people to me.