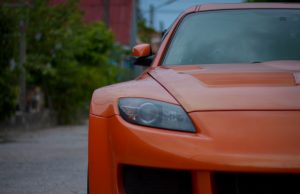 Honda has had it very unusual in their motorized past. But none as odd as the modded Mazda that they’ve found themselves within. An RX-K has been made out of a Mazda RX-8. That is to say, Aki and Trappy – part of Selfmade Autowerks and the Keep Gunnin’ movement, placed a Honda K20 inside of a Mazda RX-8. So to imagine how odd it would run may not be enough.

According to the two of them, the Keep Gunnin’ garage is a business that features all sorts of goodies that only the two would use as they fuse vehicles together. All of this work is documented upon a YouTube channel of their’s.

When there has been issues with the Honda and their I-4 2.0-liter, it has been mainly because it would sit way too close to the firewall of the Mazda. So keeping the components still enough for future maintenance was a whole different story not even worth dealing with. The engine bay side of the firewall had been cut to access, which is easy to unbolt as well, should it become necessary. Maybe to change spark plugs and other components of the sort? Most likely that was the case.

The RX-K, as they’re calling it, uses great pistons that can support the top end of the engine. This, along with other modded areas of the car, results in a very healthy 572 horsepower combined to fit the 409 lb-feet of torque around the wheels. Additionally, the engine appears to be of a powerhouse type, thanks to intercooler piping and a very cool-looking turbo intake.

There’s currently a contest to win the actual vehicle. But it won’t be for long.

And of course, if you win, make sure to ship your new car with the best online car buy shipping service in the country!