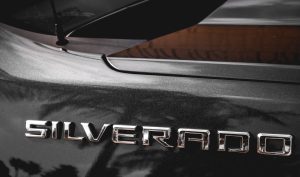 Chevrolet Silverado is going to be revealed at CES in January 2022 according to GM. There will be an opening keynote on January 5th which will serve as the platform of its debut. Moreover, it will be delivered by GM CEO Mary Barra.

Although details are really sparse. However, the automaker did give a short teaser video, photo, and a couple of pieces of information. There will be an available (likely optional) fixed glass roof. Therefore, it will be supposedly offered with better headroom than what is the current Silverado. It was also the subject in Chevy’s teaser shots.

There are two passengers lit up by a huge touchscreen. It can be seen through the large glass roof. In fact, the screen does seem to stretch from the passenger side of the center console. It is straight into where you’d be expected the instrument cluster is to start. There are air vents below the screen also a pair of very visible knobs and cup holders on the console. Right now, the rest of the truck is going to remain a mystery.

At least, it will until Chevy releases further teasers, at this point.

As for additional information, Chevy says the Silverado EV is a ground-up project using the Ultium Platform. Moreover, it has also been confirmed that there are going to be both fleet and retail versions of the electric Silverado. It is the only retail version offering the glass roof. In fact, the company says it will be promising a range of “more than 400 miles on a full charge,” but it will not elaborate. Chevy says it will be able to option four-wheel steering with the Silverado EV. The four-wheel steering will still make the Silverado EV much more maneuverable in tight spots.