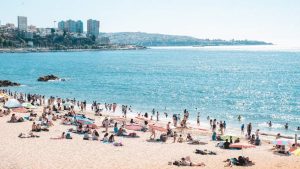 San Diegans can also expect Santa Ana winds throughout the week. However, the winds won’t be particularly strong. The winds should top out at 20mph along the coast and creep up to a maximum of 45mph inland.

The high pressure system will drive temperatures up into the 80s at San Diego International Airport, well above the mid-60s seasonal high. Escondido should get a little warmer with a forecasted high in the high-80s by mid-week. The coast will be in the low 70s.

This time of year, warmer temperatures are often seen as a welcome break from the winter. However, the temperatures are high enough to be uncomfortable for some. Furthermore, the lack of rainfall in the area is becoming an increasing cause for concern as summer approaches.

San Diego has been struggling with low rainfall for some time now. San Diego has yet to recover from the driest January on record since 2014, and has yet to return to average rainfall. Unfortunately, this may mean a worse fire season come summer time.

The weekend saw a bit of rainfall, but not enough to shore up the growing gap. At best, the small storm dropped a little more than half an inch. However, with San Diego around 3 inches below average, such little rainfall will do little to restore the area.

Hopefully, the chance of rainfall after this hot week will close that gap a bit. If not, then San Diego will be in for a very dry and brown summer. The city could face serious fire issues once August, the usual hottest month of the year, rolls around.